Jerk review: Tim Renkow has created a Larry David for a new generation 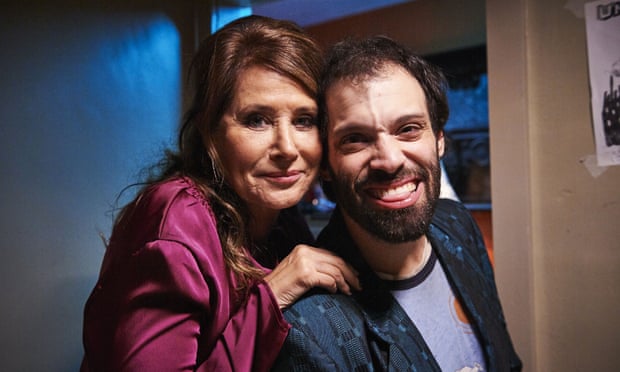 Tim Renkow is my new hero. He doesn’t get out of bed until his mum shouts him into action over Skype. He turns up to work barefoot and in pyjamas. He foments staff dissent by opening payslips and blabbing about who gets paid what. He sets off the fire alarm, causing mass panic. Best of all, when he goes to an ideas meeting, he is asked to suggest how working practices could be improved. How about, he offers, all of you get some self-respect?

To be fair, those to whom Tim is appalling deserve it. He has been hired by a greeting card manufacturer called Anarchy Hamster. The boss, Sean, who intolerably styles himself “chief lunatic”, has created a work environment of teeth-clenching, compulsory fun. Anarchy Hamster is a company devoted to flooding the world with fatuousness. So, when Tim discloses he may or may not defecate in his boss’s desk drawer, we may well think Sean has it coming. (If Tim has, which he hasn’t.)

The conceit of Jerk (BBC Three) is that Renkow’s cerebral palsy means he can get away with saying what others dare not. He is Larry David with a twist – nobody risks confronting him because he is disabled. He is cerebral palsy’s James Bond: he has licence, if not to kill, then to wound by being awful to all-comers. He is to political correctness what Boris Johnson is to statesmanship. He is a sociopathic American who parlays his palsy into guilt-tripping PC Britons – which, as you know, is as easy as shooting fish in a barrel.

There’s another reason I like Renkow. His on-screen mother is Lorraine Bracco, who has moved from one toxic relationship as Tony Soprano’s shrink to another as mother to the most unpleasant American living in Britain (a hotly contested title). We see Bracco only on Renkow’s laptop, exhorting her son to get on with his life in the hoarsely captivating voice that still reduces me to jelly even when she is speaking such unsexy words as: “I can tell you as the world’s leading authority on cerebral palsy, that being a pussy is not a symptom.” And yet, despite this sensible advice, Tim remains a pussy and a jerk: he is never going to get a worthwhile job, a date or a visa with those twin attributes.

Part of the pleasure of the opening episode is watching Renkow do everything he can to get fired, knowing that his bosses will do all they can to keep him on the payroll. “I think I’m on some sort of quota scheme, so they don’t have to hire a transsexual,” he muses sourly.

In this, Renkow is akin to George Costanza in the Seinfeld episode in which he feigned disability to get preferential treatment (including the keys to the executive washroom), knowingly exploiting bosses’ awkwardness about disability. But, while Costanza was a phoney asshole working a guilt-ridden system to his advantage, Renkow is no phoney, but all asshole. When Sean asks Tim if he has any special needs, he demands a chair made of salmon leather, new shoes and a bigger desk. Bigger than hers, he says, pointing at Anne who sits opposite.

Of course, it is wrong of him to mutate into Nigel Farage with nice but invertebrate Anne. When she breastfeeds her baby in the office, he sarcastically complains: “I didn’t think you could eat lunch at your desk.” Less wrong of him to suggest a new line for her greeting card. “Hello baby! Bye-bye wallet,” she suggests. “Bye-bye perineum,” he counters.

How can disability be funny? Jerk suggests one way, not by making us laughing at disability (that, as you know, is wrong), but by exploiting the comic potential of a situation in which a jerk uses their disability to yank someone’s chain. Renkow gets his kicks from making others feel bad about his disability. Typical is the opening gag in which a man comes out of a cafe’s disabled toilet to be confronted by Renkow, who has thrown a glass of water over his crotch and gives his adversary a how-could-you? stare.

The first episode is mostly a delight, although Renkow could have made more of the scene in which he struggles to get his walking frame into the office through the only entrance, a set of rotating doors. Also delightful are the two sidekicks Renkow and his co-writers Shaun Pye and Stu Richards have created. Idris is a geek who tries and largely fails to be Tim’s employment consultant (there is literally nobody on British TV less like Idris Elba than him), and my other new hero is Ruth, Tom’s epically careless care-worker. Ruth is a bigger jerk than the eponymous jerk himself, getting one client (Renkow) to make her sandwiches while she chillaxes, deferring her visit to another, incontinent, client. “You’re so emotionally retarded,” he tells Ruth. “Tim,” she replies tartly. “You know we don’t use that word.” “Sorry. You’re not emotional.” “Thank you,” she replies. Just possibly, the jerk has met his match.