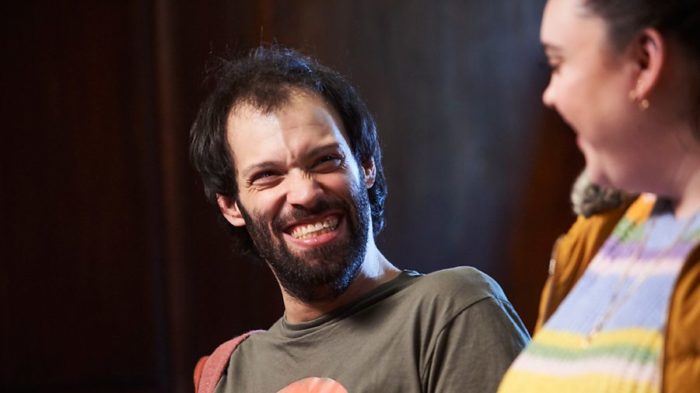 “I think I might be a superhero.” That’s Tim Renkow in Jerk, BBC Three’s hysterical new sitcom. The show follows Tim (Renkow), a young man with cerebral palsy trying to get through life in a world where everyone treats him differently. He knows they all judge him based on his appearance, and he also knows that they judge him incorrectly – because underneath it all, he’s a total dick. And so he goes through the day-to-day routines of jobs and friendships making everyone uncomfortable – and he does so entirely on purpose. “I think I might be a superhero,” he declares. Then adds: “My super power is I can’t be sacked.”

That simple principle is behind all of Jerk’s humour, and it paves the way for a complex show. On the one hand, it exposes how society is so intently politically correct that it’s unwilling to criticise a person with cerebral palsy for their behaviour. On the other, it shows that there’s more to our lead than his neurological condition, and Tim makes the most of that opportunity to be as much of a jerk as possible.

From hitting on people to playing pranks on them, not to mention lying his way through job interviews, he’s entertainingly, intelligently, brutally cruel. He blags a role at a greeting cards company (“Anarchy Hamster”), only to draw poo and genitalia all over their products – much to the dismay of co-worker Anne (a wonderfully stoney-faced Cicely Giddings) and the nervous prevarications of middle-management Shaun (the always-enjoyable Karl Theobald). Renkow, meanwhile, grins with a laugh-out-loud brashness, pushing every boundary he can, as he rails against a company that is only trying to fulfil their quota of diverse employee demographics. It’s a righteous cause, but one that he tackles in all the wrong ways, and that juxtaposition is where Jerk succeeds as something deliciously unique.

Tim’s equally dismissive of the young worker at the job centre (the likeable Rob Madin) trying to help him out. His name’s Idris, but he “definitely isn’t no Idris”, in the disappointed words of Ruth (the excellent Sharon Rooney), Tim’s care worker. They’re the ones, tellingly, who stick around with Tim, because they treat him as the selfish, immature jerk he actually is. Rooney’s Ruth is amusingly caustic at every opportunity, spending more time sending Tim to the shops on her behalf than actually offering any kind of support. Idris, meanwhile, just desperately wants to do the right thing – not least because Tim’s visa is coming up for renewal imminently.

Tim, meanwhile, is too busy pulling any prank he can to avoid worrying about getting a girlfriend or making sure he’s allowed to say in the country. And so we watch him as he throws water over his crotch in a cafe to guilt-trip a guy who used the disabled loo and destroys pieces of art with his walking frame. By the time we’ve reach the end of the final episode, it’s almost not a shock that he’s pretended to be a refugee to get free food.

Renkow and co-writers Stu Richards and Shaun Pye (who also gave us the brilliantly honest There She Goes) have a glorious knack for escalating events just far enough to be awkward and hilarious at the same time – there’s a Curb Your Enthusiasm-esque vein of humour running through each episode, while one sequence between Tim and his nemesis is the kind of timeless comic set piece that could have come right out of Naked Gun. Lorraine Bracco, as Tim’s mum, dives right into that careful balance, popping up over Skype (or into his bedroom) to get him out of whatever mess he’s in (including his bedroom), quiz him on his love life or simply insult him – something she does with an impressive sense of genuine affection. “I’ll come visit you in Guantanamo,” she signs off after one conversation, all brash, loud words and undeniable heart.

Throughout, Renkow’s performance is a fiendish delight, balancing that humour and wickedness with a hint of tragedy, as we watch Tim become a master of his own downfall, simply by shirking the important things in life he has to address. “I want to be a stunt pilot,” he tells Idris, with a flawless deadpan stare. “Do you have experience?” comes the reply. “How do you think I got like this?” he quips back, relishing the expressions that play across Idris’ face. Clever, sweet and gleefully dark, this is one of BBC Three’s best comedy commissions to date. Watch it immediately.

Jerk is available on BBC iPlayer until July 2019.

Rating – 9: Unique, sweet and gleefully dark, this is one of BBC Three’s best comedy commissions to date.