JERK BBC REVIEW: Fleabag isn’t the only boundary-pushing BBC comedy you should be watching 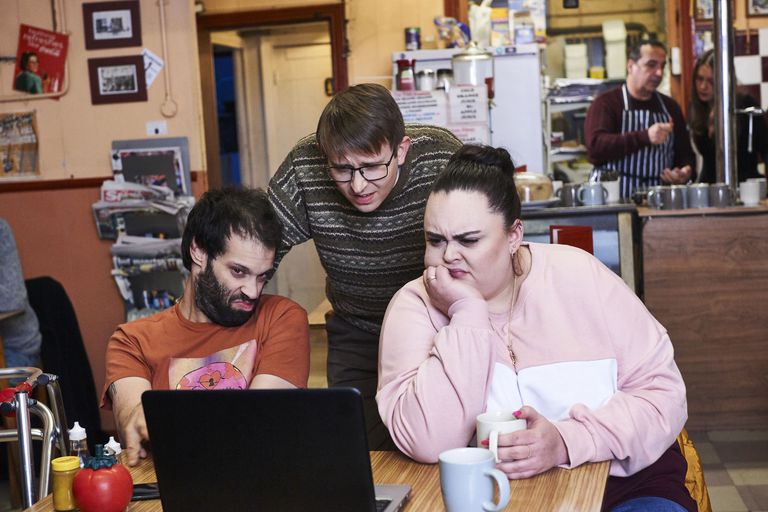 Jerk is *quite* something.

Fleabag‘s brilliant season-two premiere rightly got everyone talking, but it was followed by something equally as bold.

As part of BBC Three’s new slot on BBC One, the first episode of Jerk got its broadcast premiere on Monday (March 4), having been available on BBC iPlayer since February 24. The seriously dark comedy now deserves to find a bigger audience.

Created by Tim Renkow and expanded from his one-off pilot in 2016, Jerk sees the comedian (who has cerebral palsy) play a heightened version of himself. The Tim in the show is an art-school dropout who knows he can use his disability to get away with doing just about everything, from being lazy at work to taking advantage of a refugee charity.

Jerk sets its stall out in the very first scene. In a cafe, Tim notices a douchebag go into the disabled toilet, so he intentionally spills a glass of water on his trousers and stands outside the toilet to prank the guy as he comes out.

You’d be forgiven for describing Jerk as Curb Your Enthusiasm with a disabled lead. Tim often isn’t remotely likeable, revelling in making people around him feel uncomfortable and saying things like he won’t lose his job because his hiring means “they don’t need to hire a transexual”.

But that’s the point. With Jerk (and his own stand-up comedy), Renkow wants to show that disabled people, like anyone else, can be utter douchebags too.

“Often with disabled people [on TV], that’s what defines them,” he told Joe. “That’s why the character is such a lazy piece of shit – because every other sitcom character is. I feel like disabled people are never allowed to be human. So he is just a human, with a lot of flaws.”

In an interview with The Guardian, Renkow explained that he also made Jerk as he’s “trying to find a group of people that I’m not allowed to make fun of”. And he definitely takes aim at a lot of different people and cultures.

Episode two, for example, sees Tim pretend to be a Syrian refugee called ‘Mohammed Ali’ (who also happens to be an ex-skateboard champion), just to get some free food. The breathtakingly un-PC episode sees Tim end up in a charity campaign video, led by a fame-hungry charity worker, and finishes with a final scene that’ll leave you stunned.

Jerk isn’t just about Renkow taking potshots at other people, though, as he happily turns the spotlight on himself.

Largely this comes from a wonderful performance from The Sopranos star Lorraine Bracco as Tim’s mum, who regularly mocks him for his laziness, but Britain’s Got Talent winner Lee Ridley also gets in on the act in episode three as Tim’s nemesis.

Alongside Bracco, the small regular cast features My Mad Fat Diary‘s Sharon Rooney as Tim’s dreadful carer Ruth and Rob Madin as the hapless Idris, one of the few nice guys in the show, although even he gets his moment to be selfish in the final episode.

And while the series does come to a fitting conclusion, we really hope this isn’t the last we’ve seen of Tim and his horrible ways.

Jerk is available to watch in full on BBC iPlayer and continues on Monday (March 11) at 11pm on BBC One.